Insisting that he has always been aware of Poe’s genius, South Carolina author William Gilmore Simms (1806–1870) admonishes Poe to change course and be prudent: “How can you expect a magazine proprietor to encourage contributions which embroil him with all his neighbors? These broils do you no good – vex your temper, destroy your peace of mind, and hurt your reputation.” Writing as a friend, Simms was surely aware of the injury Poe did to his current (if not future) reputation every time he attacked the bard of Cambridge.

Dear Sir, — I received your note a week ago, and proceeded at once to answer it, but being in daily expectation of a newspaper from the South, to which, in a Letter, I had communicated a paragraph concerning the matter which you had suggested in a previous letter, I determined to wait until I could enclose it to you. It has been delayed somewhat longer than I had anticipated, and has in part caused my delay to answer you. I now send it you, and trust that it will answer the desired purpose; though I must frankly say that I scarcely see the necessity of noticing the sort of scandal to which you refer. — I note with regret the very desponding character of your last letter. I surely need not tell you how deeply and sincerely I deplore the misfortunes which attend you, — the more so as I see no process for your relief and extrication but such as must result from your own decision and resolve. No friend can help you in the struggle which is before you. Money, no doubt, can be procured; but this is not altogether what you require. Sympathy may soothe the hurts of Self Esteem, and make a man temporarily forgetful of his assailants; but in what degree will this avail, and for how long, in the protracted warfare of twenty or thirty years? You are still a very young man, and one too largely and too variously endowed, not to entertain the conviction — as your friends entertain it — of a long and manful struggle with, and a final victory over, fortune. But this warfare, the world requires you to carry on with your own unassisted powers. It is only in your manly resolution to use these powers, after a legitimate fashion, that it will countenance your claims to its regards and sympathy; and I need not tell you how rigid and exacting it has been in the case of the poetical genius, or, indeed, the genius of any order. Suffer me to tell you frankly, taking the privilege of a true friend, that you are now perhaps in the most perilous period of your career-just in that position just at that time of life — when a false step becomes a capital error -when a single leading mistake is fatal in its consequences. You are no longer a boy. “At thirty wise or never!” You must subdue your impulses; &, in particular, let me exhort you to discard all associations with men, whatever their talents, whom you cannot esteem as men. Pardon me for presuming thus to counsel one whose great natural and acquired resources should make him rather the teacher of others. But I obey a law of my own nature, and it is because of my sympathies that I speak. Do not suppose yourself abandoned by the worthy and honorable among your friends. They will be glad to give you welcome if you will suffer them. They will rejoice — I know their feelings and hear their language — to countenance your return to that community — that moral province in society — of which, let me say to you, respectfully and regretfully, — you have been, according to all reports but too heedlessly, and, perhaps, too scornfully indifferent. Remain in obscurity for awhile. You have a young wife — I am told a suffering & an interesting one, — let me entreat you to cherish her, and to cast away those pleasures which are not worthy of your mind, and to trample those temptations under foot, which degrade your person, and make it familiar to the mouth of vulgar jest. You may do all this, by a little circumspection. It is still within your power. Your resources from literature are probably much greater than mine. I am sure they are just as great. You can increase them, so that they shall be ample for all your legitimate desires; but you must learn the worldling’s lesson of prudence; — a lesson, let me add, which the literary world has but too frequently & unwisely disparaged. It may seem to you very impertinent, — in most cases it is impertinent — that he who gives nothing else should presume to give counsel. But one gives that which he can most spare, and you must not esteem me indifferent to a condition which I can in no other way assist. I have never been regardless of your genius, even when I knew nothing of your person. It is some years since I counselled Mr Godey to obtain the contributions of your pen. He will tell you this. I hear that you reproach him. But how can you expect a magazine proprietor to encourage contributions which embroil him with all his neighbors? These broils do you no good — vex your temper, destroy your peace of mind, and hurt your reputation. You have abundant resources upon which to draw even were there no Grub Street in Gotham. Change your tactics and begin a new series of papers with your publisher. The printed matter which I send you, might be quoted by Godey, and might be ascribed to me. But, surely, I need not say to you that, to a Southern man, the annoyance of being mixed up in a squabble with persons whom he does not know, and does not care to know, — and from whom no Alexandrine process of cutting loose, would be permitted by society — would be an intolerable grievance. I submit to frequent injuries and misrepresentations, content, though annoyed by the slaves [[sic]], that the viper should amuse himself upon the file, at the expense of his own teeth. As a man, as a writer, I shall always be solicitous of your reputation & success. You have but to resolve on taking and asserting your position, equally in the social and the literary world, and your way is clear, your path is easy, and you will find true friends enough to sympathize in your triumphs.

P. S. If I could I should have been to see you. But I have been and am still drudging in the hands of the printers, kept busily employed night and day. Besides, my arrangements are to hurry back to the South where I have a sick family. A very few days will turn my feet in that direction. 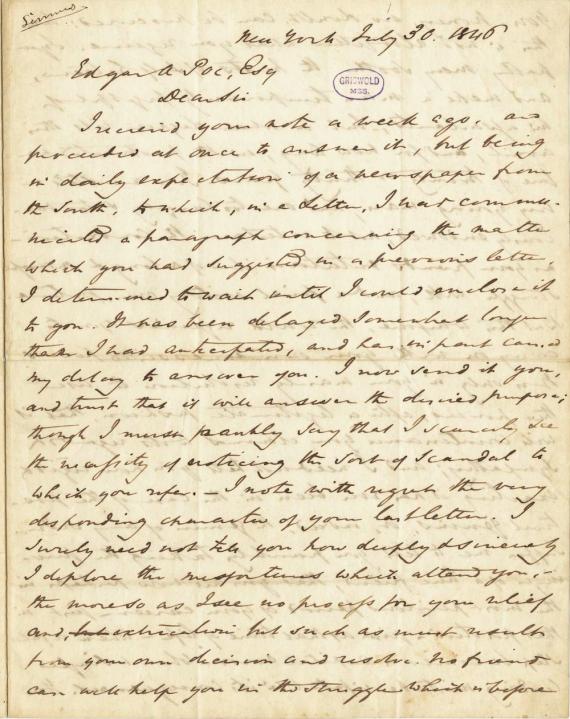