The collegial tone of this letter suggests a feeling of fellowship shared by these controversial literary figures who were running into each other at New York salons and reviewing the same writers around this time. Poe took particular delight in the fact that Fuller—Bostonian, feminist, and transcendentalist—also judged Longfellow harshly. Like Poe, Fuller denied Longfellow “the future.” In her study of “American Literature: Its Position in the Present Time, and Prospect for the Future” (1846), she observed that  “the hyperbole of paid or undiscerning reviewers” had given “a temporary interest to [Longfellow’s] productions beyond what they would permanently command.”

In “The Whole Duty of Woman,” a poem Fuller  published in the August 23, 1845, issue of the Broadway Journal, which Poe was co-editing at the time, she mocked the view that women are intellectually inferior: creatures of affection only whose primary function is to adore their men. Focusing particularly on lines from Longfellow’s early play, The Spanish Student, she explodes the argument against woman’s equality by taking it to extremes:

“What I most prize in woman
Is her affection, not her intellect.”
So says the poet Longfellow—and in
saying this
He but repeats the sentiments of all
the nobler sex.
“Pooh! We don’t want sense in women!
It only injures, and renders them more
difficult to manage.
We have enough for both …”

To the Editor of The Broadway Journal.

I was much obliged to you for your ready acceptance of my article entitled “A peep behind the curtain” and I was very much gratified that you were not alone in your estimate of it, as it was copied very extensively into the public papers. I hope I shall always be equally fortunate.

The object of the present communication speaks for itself. It is to ridicule a style of writing very common in your sex, when discoursing of ours, but which deserves no better epithet than ineffable silliness. I am aware that Longfellow is a popular poet & deservedly so, but I am sure he will not be offended at such a mere piece of pleasantry, coming as it does from one of the party to whom such soft nonsense is addressed. I also wished to make some slight acknowledgment to the notice in the Whig review for this very flattering view he takes of the weaker sex. 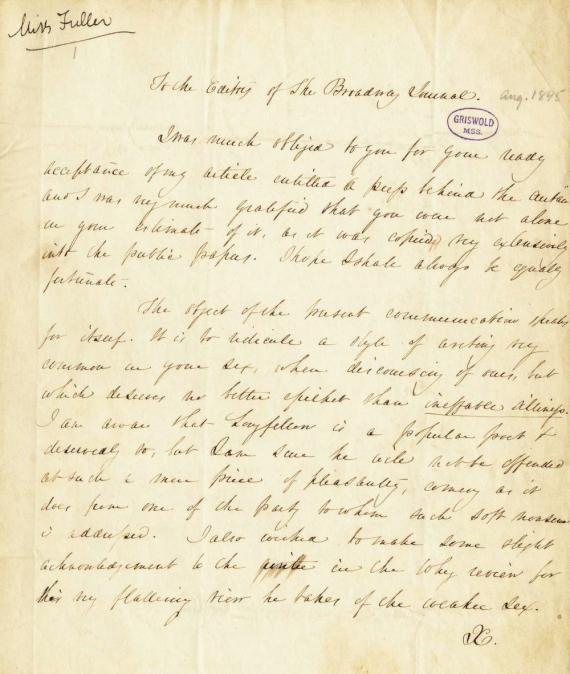