Poe reviewed Lowell’s A Fable for Critics in the March 1849 issue of the Southern Literary Messenger. In the review, he decried Lowell’s willful exclusion of Southern authors:

It is a fashion among Mr. Lowell’s set to affect a belief that there is no such thing as Southern Literature. Northerners — people who have really nothing to speak of as men of letters, — are cited by the dozen and lauded by this candid critic without stint, while Legard, Simms, Longstreet, and others of equal note are passed by in contemptuous silence. Mr. L. cannot carry his frail honesty of opinion even so far South as New York. All whom he praises are Bostonians. Other writers are barbarians and satirized accordingly — if mentioned at all.

In this letter to his frequent correspondent, he places his view of Lowell’s Fable in the context of his broad criticism of Bostonian authors.

They are getting worse and worse, and pretend not to be aware that there are any literary people out of Boston. The worst and most disgusting part of the matter is, that the Bostonians are really, as a race, far inferior in point of anything beyond mere talent, to any other set upon the continent of N. A. They are decidedly the most servile imitators of the English it is possible to conceive. I always get into a passion when I think about [it].

Your letter, dated Nov. 27, has reached me at a little village of the Empire State, after having taken, at its leisure, a very considerable tour among the P. Of rices — occasioned, I presume, by your endorsement “to forward” wherever I might be — and the fact is, where I might not have been, for the last three months, is the legitimate question. At all events, now that I have your well-known M.S. before me, it is most cordially welcome. Indeed, it seems an age since I heard from you and a decade of ages since I shook you by the hand — although I hear of you now and then. Right glad am I to find you once more in a true position — in the field of Letters.” Depend upon it, after all, Thomas, Literature is the most noble of professions. In fact, it is about the only one fit for a man. For my own part, there is no seducing me from the path. I shall be a litterateur, at least, all my life; nor would I abandon the hopes which still lead me on for all the gold in California. Talking of gold, and of the temptations at present held out to “poor-devil authors”, did it ever strike you that all which is really valuable to a man of letters — to a poet in especial — is absolutely unpurchaseable? Love, fame, the dominion of intellect, the consciousness of power, the thrilling sense of beauty, the free air of Heaven, exercise of body & mind, with the physical and moral health which result — these and such as these are really all that a poet cares for: — then answer me this — why should he go to California? Like Brutus, “I pause for a reply” — which, like F. W. Thomas, I take it for granted you have no intention of giving me. — [I have read the Prospectus of the “Chronicle” and like it much especially the part where you talk about “letting go the finger” of that conceited body, the East — which is by no means the East out of which came the wise men mentioned in Scripture!] I wish you would come down on the Frogpondians. They are getting worse and worse, and pretend not to be aware that there are any literary people out of Boston. The worst and most disgusting part of the matter is, that the Bostonians are really, as a race, far inferior in point of anything beyond mere talent, to any other set upon the continent of N. A. They are decidedly the most servile imitators of the English it is possible to conceive. I always get into a passion when I think about. It would be the easiest thing in the world to use them up en masse. One really well-written satire would accomplish the business: — but it must not be such a dish of skimmed milk-and-water as Lowell’s. [Page 2:]

I suppose you have seen that affair — the “Fable for Critics” I mean. Miss Fuller, that detestable old maid — told him, once, that he was “so wretched a poet as to be disgusting even to his best friends”. This set him off at a tangent and he has never been quite right since: — so he took to writing satire against mankind in general, with Margaret Fuller and her protege, Cornelius Matthews, in particular. It is miserably weak upon the whole, but has one or two good, but by no means original, things — Oh, there is “nothing new under the sun” & Solomon is right — for once. I sent a review of the “Fable” to the “S. L. Messenger” a day or two ago, and I only hope Thompson will print it. Lowell is a ranting abolitionist and deserves a good using up. It is a pity that he is a poet. — I have not seen your paper yet, and hope you will mail me one — regularly if you can spare it. I will send you something whenever I get a chance. — [With your co-editor, Mr [[illegible]] I am not acquainted personally but he is well known to me by reputation. Eames, I think, was talking to me about him in Washington once, and spoke very highly of him in many respects — so upon the whole you are in luck] — The rock on which most new enterprizes, in the paper way, split, is nambypamby-ism. It never did do & never will. No yea-nay journal ever succeeded. — but I know there is little danger of your making the Chronicle a yea-nay one. I have been quite out of the literary world for the last three years, and have said little or nothing, but, like the owl, I have “taken it out in thinking”. By and bye I mean to come out of the bush, and then I have some old scores to settle. I fancy I see some of my friends already stepping up to the Captain’s ofice. The fact is, Thomas, living buried in the country makes a man savage — wolfish. I am just in the humor for a fight. You will be pleased to hear that I am in better health than I ever knew myself to be — full of energy and bent upon success. You shall hear of me again shortly — and it is not improbable that I may soon pay you a visit in Louisville. — If I can do anything for you in New-York, let me know. — Mrs Clemm sends her best respects & begs to be remembered to your mother’s family, if they are with you. — You would oblige me very especially if you could squeeze in what follows, editorially. The lady spoken of is a most particular friend of mine, and deserves all I have said of her. I will reciprocate the favor I ask, whenever you say the word and show me how. Address me at N. York City, as usual and if you insert the following, please cut it out & enclose it in your letter.

Truly your friend,
Edgar A Poe. 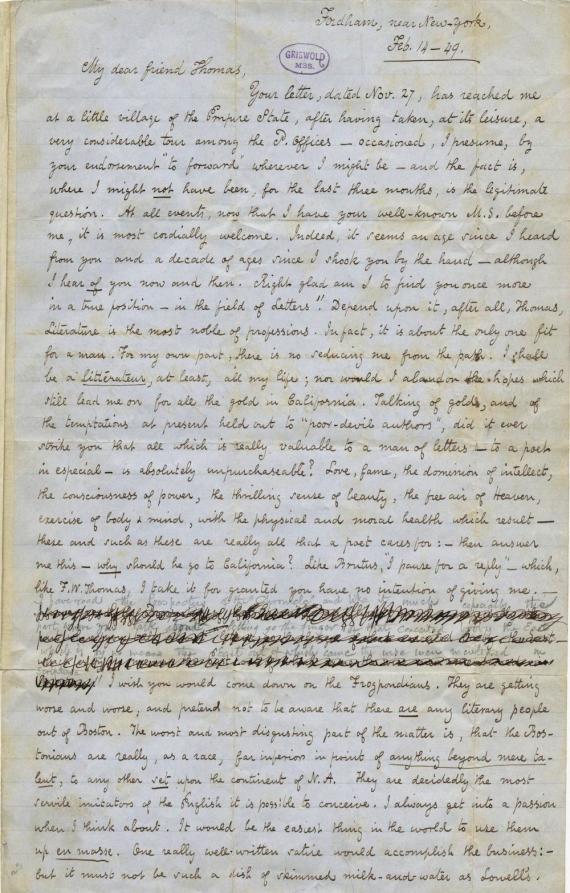