In this brief but negative review of Hyperion, Longfellow’s early autobiographical romance, Poe first predicted that Longfellow’s popularity would fade:

We grant …  [Longfellow] high qualities, but deny him the Future. In the present instance, without design, without shape, without beginning, middle, or end, what earthly object has his book accomplished? – what definite impression has it left?

Were it possible to throw into a bag the lofty thought and manner of the “Pilgrims of the Rhine,” together with the quirks and quibbles and true humor of “Tristram Shandy,” not forgetting a few of the heartier drolleries of Rabelais, and one or two of the Phantasy Pieces of the Lorrainean Callôt, the whole, when well shaken up, and thrown out, would be a very tolerable imitation of “Hyperion.” This may appear to be commendation, but we do not intend it as such. Works like this of Professor Longfellow, are the triumphs of Tom O’Bedlam, and the grief of all true criticism. They are potent in unsettling the popular faith in Art – a faith which, at no day more than the present, needed the support of men of letters. That such things succeed at all, is attributable to the sad fact that there exist men of genius who, now and then, unmindful of duty, indite them – that men of genius  ever indite them is attributable to the fact that these are often the most indolent of human beings. A man of true talent who would demur at the great labor requisite for the stern demands of high art – at the unremitting toil and patient elaboration which, when soul-guided, result in the beauty of Unity, Totality, and Truth – men, we say, who would demur at such labor, make no scruple of scattering at random a profusion of rich thought in the pages of such farragos as “Hyperion.” Here, indeed, there is little trouble but even that little is most unprofitably lost. To the writers of these things we say – all Ethics lie, and all History lies, or the world shall forget ye and your works. We have no design of commenting, at any length, upon what Professor Longfellow has written. We are indignant that he too has been recreant to the good cause. We, therefore, dismiss his “Hyperion” in brief. We grant him high qualities, but deny him the Future. In the present instance, without design, without shape, without beginning, middle, or end, what earthly object has his book accomplished? – what definite impression has it left? 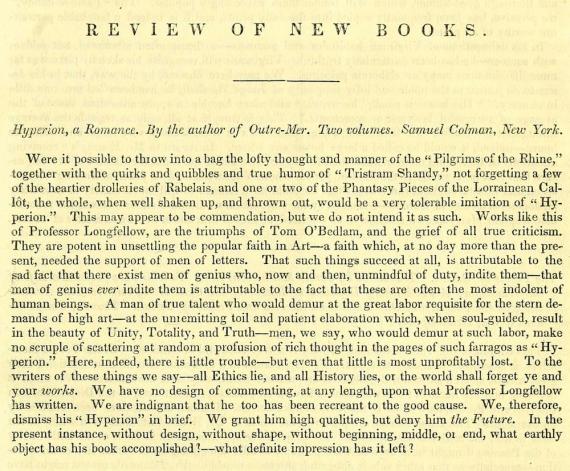